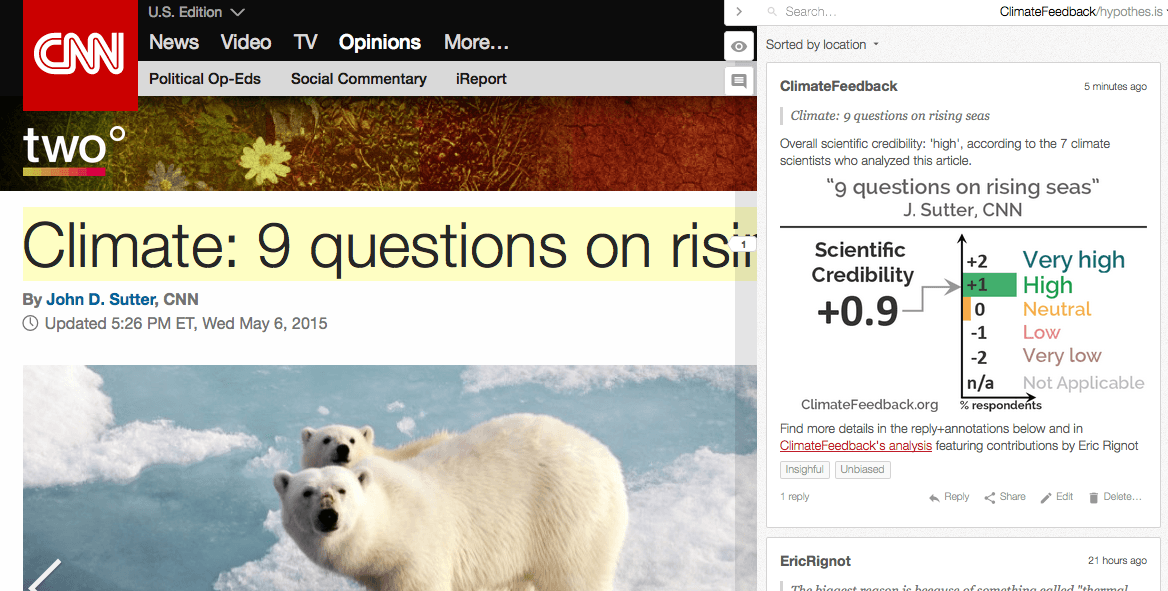 The article succeeds in conveying the main causes, aspects and impacts of rising sea levels. While it does contain a few incomplete scientific statements and facts that ought to be explored and expanded upon in more depth, the article accurately conveys the general scientific realities of the issue.

Eric Rignot, Professor, University of California Irvine & Jet Propulsion Laboratory
The present article requires correction because some facts are missing or misleading. I find the link between the 2-degree world and sea level rise weak. It is not clear what sea level rise will be avoided by limiting warming to 2 degrees. Personally, I am not satisfied with a +2 deg world because ice sheet melt won’t stop with that. I would rather support a return to conditions prevailing in the earlier part of the 20th century. Yes, that means we have to find ways to suck the CO2 back in, not just limit our emissions. What an exciting challenge!

Ken Mankoff, Postdoctoral Scholar, Woods Hole Oceanographic Institution
Overall I found the article to be mostly accurate. There are some minor issues, but these are mostly issues of more detail, not of incorrect statements. I’m happy to see this level of reporting on CNN.

Ernst Schrama, Associate Professor, Delft University of Technology:
It is a relatively short article but it does capture the main details. It would strengthen in my opinion if the writers took care in mentioning the sources.

Keven Roy, Research Fellow, Nanyang Technological University:
This article does a very good job at presenting the main aspects of sea level rise and how it will impact coastal regions. There are some incomplete statements (notably with regards to the notion that sea level scenarios presented are global averages), but they do not detract from the main message.

Britta Voss, Postdoctoral Research fellow, U.S. Geological Survey:
This article provides an accurate and fairly thorough discussion of the causes and impacts of global warming-caused sea level rise. It left out a lot of important details regarding local differences and the wide range in projections of future global average sea level rise.

Arthur Lutz, PhD Candidate, Future Water & Utrecht University:
The article is quite good and reasonably complete, it focuses very much on the changes in global mean sea level. The spatial differences in sea level change will be very large and thus play an important role, which is overlooked in the article

Alexis Berg, Research Associate, Harvard University:
It seems to me this article presents the different aspects of the issue of sea-level rise rather accurately, given the short format.