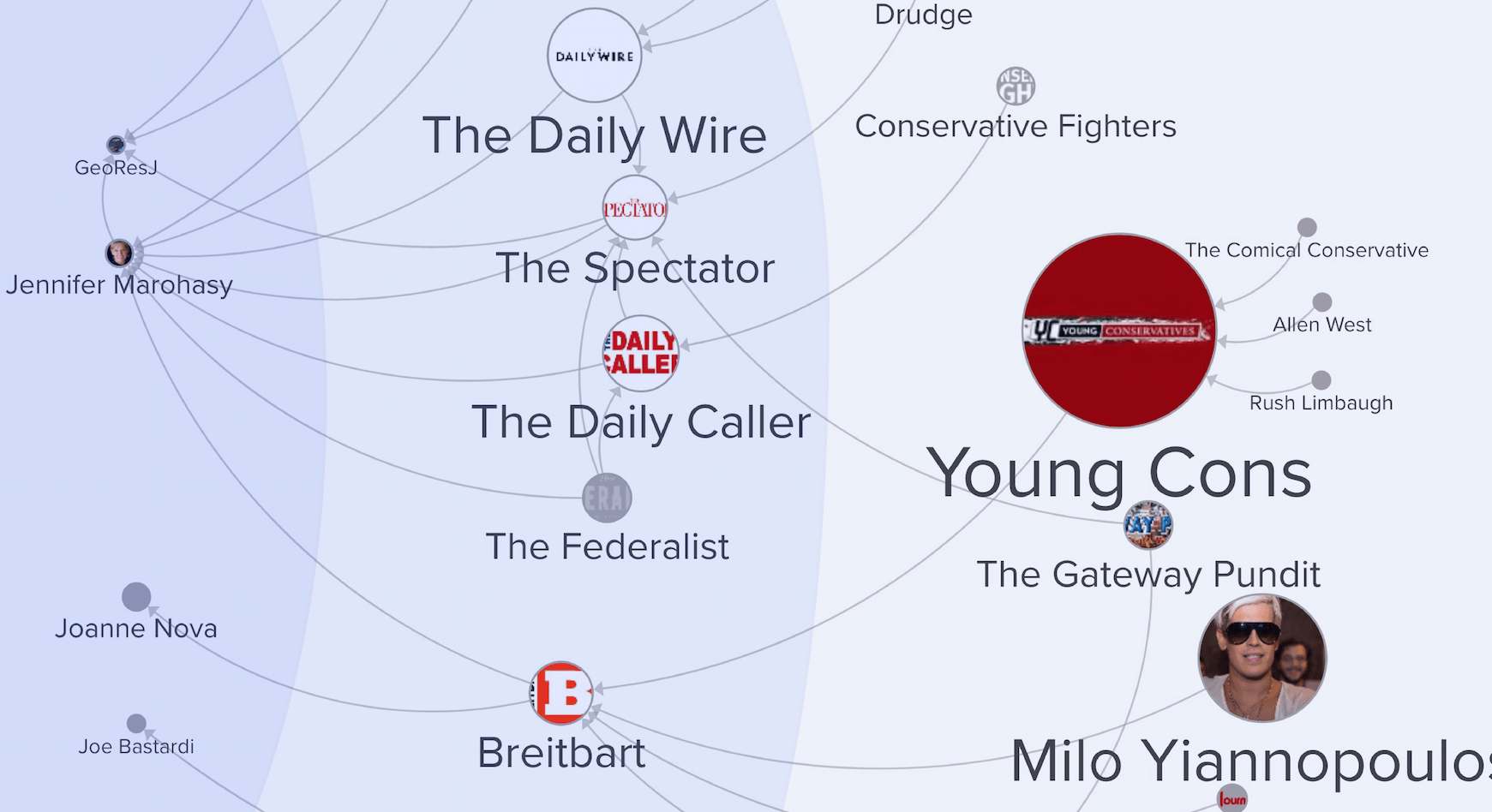 Recently, a number of websites wrote about a paper published in the journal GeoResJ—a quarterly journal that will be discontinued after its January 2018 issue—that was written by two members of an Australian think tank. The paper claims to demonstrate that almost all of modern global warming can be explained without human activities, and that the sensitivity of Earth’s climate to additional greenhouse gases is very low.

The authors claimed to identify cyclical variations in past temperature records, which they projected forward to the present day. They concluded that the world would have warmed nearly as much as has been observed even without any human-caused greenhouse gas emissions. However, scientists have highlighted a number of important flaws in the paper’s methods, and have found that this single paper does not, in fact, overturn the existing research that points very clearly to a human cause behind current climate change.

Scientists explain the flaws in the study

For example, Director of NASA’s Goddard Institute for Space Studies, Gavin Schmidt, showed that the authors had failed to accurately acquire and characterize some of the records of past temperature they used. In an interview, Schmidt said “something went wrong” when the authors digitized their data: the dates had shifted by about 35 years “so what they think is 2000, is actually 1965”. This had the result of excluding the warming of the last 50 years—meaning that their projection had not actually been shown to match the observed warming trend after all.

Climate Feedback asked three scientists to review the central claim of the paper. (You can read their full comments in this review.) University College London Senior Lecturer Chris Brierley commented on one of the major shortcomings of the paper:

“The authors here clearly know that humans have increased CO2 levels and that would be expected to alter the energy budget of the climate. There are certain situations where the statistical assumptions going into the sort of Artificial Neural Network built by the authors are just not met. The introduction of a new factor (us and our emissions) not present in the training data (the climate proxy record) is clearly one such situation.”

“Abbot and Marohasy’s method assumes that temperature changes over centuries move up and down in accordance with sine-curves, with no physical explanation for why temperatures should do that. Earth’s temperature does not know what a sine curve is and there is no reason to think that Earth’s temperature should follow magic ‘natural cycle’ sine-curves. To be more specific, we know that a large portion of the cooling during the Little Ice Age was caused by negative radiative-forcing from volcanic eruptions. So temperatures went down, not because they were following some magic ‘natural cycle’ sine-curve but because they were pushed downward from Earth experiencing a negative energy imbalance due to volcanic aerosols.”

McGill University Professor Shaun Lovejoy examined issues with the author’s statistical methods as well as a fundamental failure to select and compare appropriate datasets. While the authors draw conclusions about climate change at the global scale, they rely on just a few datasets that record local climate (six records have been picked while several hundred proxy records exist). Lovejoy said,

“As the authors themselves comment on multiple occasions, on multidecadal time scales the proxy temperatures fluctuate about ±1 °C. This is normal since each proxy only represents the behavior of a tiny region. When the IPCC claims that the industrial epoch temperature has increased by about 1 °C, they are referring to the globally averaged surface air temperature, and this varies only by about ±0.1 °C (over decadal time scales). The authors—being apparently unfamiliar with climate science—seem to have missed the factor of 10 discrepancy.”

Given that the paper’s claims and methods do not stand up to scientists’ scrutiny, how did the media react to it? We have compiled a list of the most influential blog posts and news outlet coverage. With the exception of the article in The Guardian, where scientists detailed the study’s flaws, none of the publications listed below interviewed any scientists with expertise on the subject to hear their assessment of the quality of the new publication—standard practice among professional science journalists.

The diagram below shows that the articles mostly rely heavily on each other—like in an echo chamber—with very few outside sources included in the reporting. A first wave of “reporting” appeared in The Spectator, The Daily Caller, The Daily Wire, and Breitbart, which were then largely copied and pasted in a second wave of posts with larger audiences, including Young Conservatives and Milo Yiannopoulos’ blog. 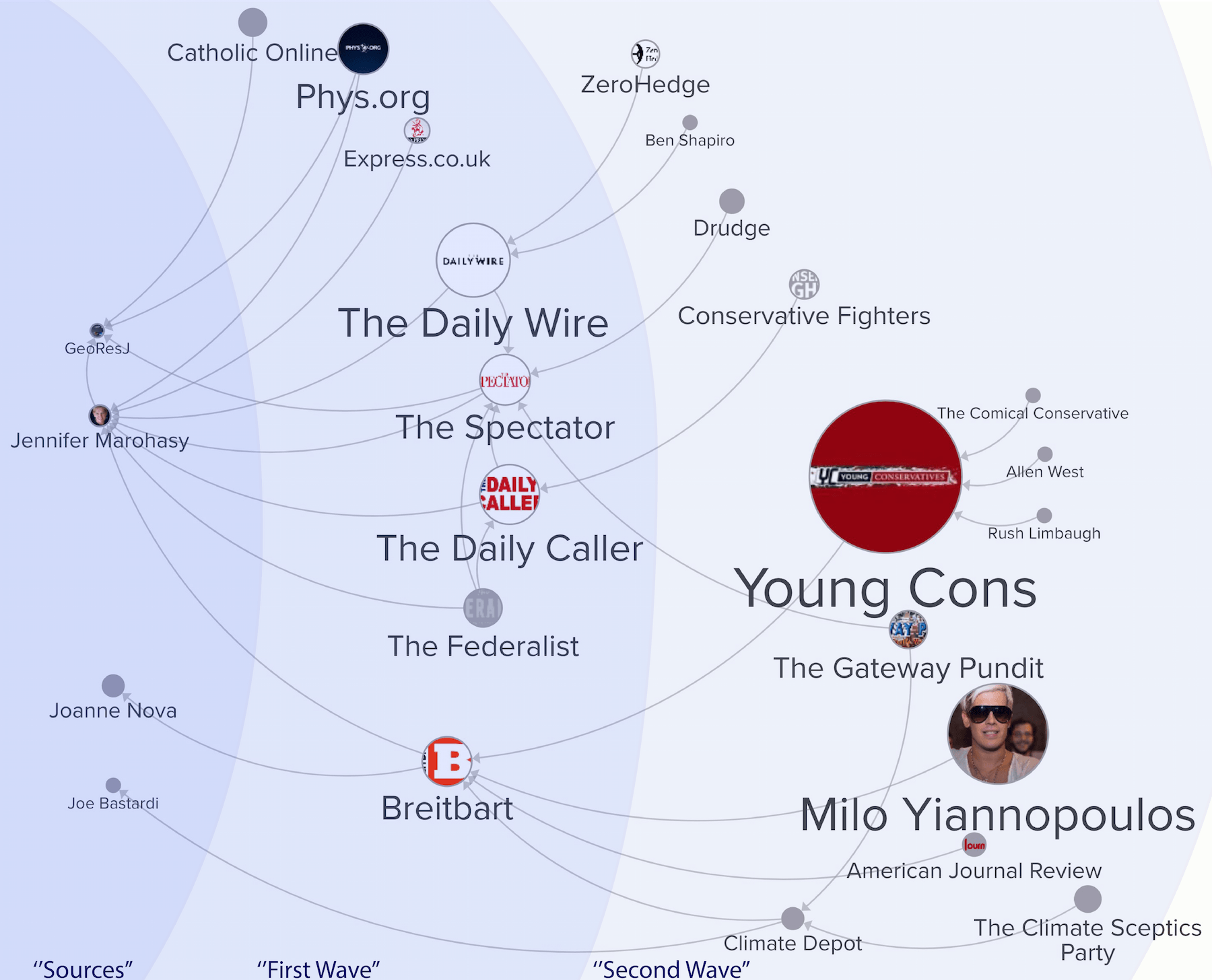 Figure – The network of outlets, blogs, and social media profiles who have shared and endorsed the claim of the GeoResJ paper. Dot sizes are proportional to the total number of shares and interactions on social media; arrows represent citations from an article to its source.

In total, nearly 150,000 people have shared this piece of misinformation, and probably at least 10 times this number (more than a million) have been exposed to it, particularly on Facebook.

This pattern is similar to another example we examined involving a story in The Mail on Sunday that falsely claimed the US National Oceanic and Atmospheric Administration had improperly manipulated global temperature data. That story spread through many of the same websites (Daily Caller, Breitbart, Daily Wire…), indicating that this network of outlets appears to uncritically propagate false information about climate change—as long as that information supports their prior belief that humans are not to blame for climate change or that nothing should be done about it.