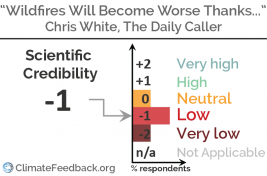 in The Daily Caller, by Chris White

"The causes of the increase in burned area in the western US in recent decades – and the record-setting fires of 2020 – are complex, driven by a mix of a changing climate, a 100-year legacy of overzealous fire suppression in forests adapted for frequent low-level fires, more people living in highly flammable wildland urban interface areas, and at times a counterproductive role of some environmental regulations. However, this article glosses over much of this complexity, presenting a simple but misleading narrative that land management rules enacted by the Clinton administration set the stage for the destructive fires we are experiencing today." 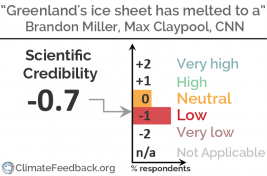 in CNN, by Max Claypool and Brandon Miller

The article in CNN discusses findings from a study published August, 2020 that analyzes trends of ice discharge from the Greenland Ice Sheet over the past three decades[1]. Reports on this study were also published by Reuters and Phys.org, receiving over 200,000 interactions on Facebook across the three articles, according to CrowdTangle. Scientists who reviewed … Continued 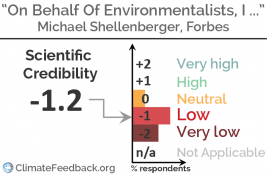 in Forbes, by Michael Shellenberger

"Shellenberger’s article promoting his new book “Apocalypse Never” includes a mix of accurate, misleading, and patently false statements. While it is useful to push back against claims that climate change will lead to the end of the world or human extinction, to do so by inaccurately downplaying real climate risks is deeply problematic and counterproductive." 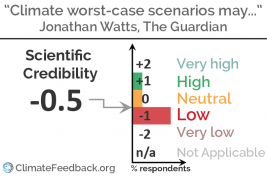 "The article correctly reports that the most recent versions of some climate models estimate more warming for a given increase in CO2 concentrations. It is also correct in highlighting that how clouds are represented in these models is the likely reason for these higher estimates. However, it does not report all the science available on this topic and its claims are thus misleading." 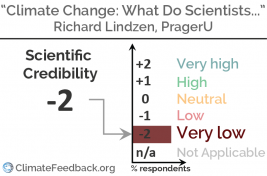 in PragerU, by Richard Lindzen

This video discussing climate change was first published on PragerU’s website in April 2016 and recently posted on Facebook in May 2020. Scientists that evaluated the video found several claims about climate change to be incorrect and misleading to viewers. 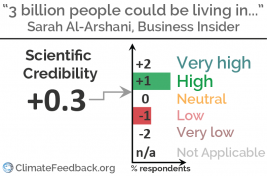 in Business Insider, by Sarah Al-Arshani

The article in Business Insider discusses findings from a study published May, 2020 that projected one to three billion people could live in much warmer climates by 2070, assuming migration is limited and greenhouse gas emissions remain high. The Business Insider article accurately describes the study’s projected changes in mean annual temperatures around the globe, however, the study does not describe these increased temperatures as “unbearable” or “unlivable,” as claimed in the article. 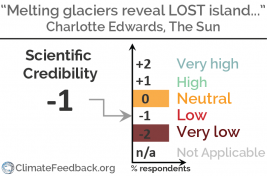 in The Sun, by Charlotte Edwards

This article in The Sun describes the chance discovery of a small island in Antarctica’s Pine Island Bay, which seems to have appeared in the last decade. But the article sensationally connects this with a recent record high temperature at a station elsewhere in Antarctica. While warming trends in the atmosphere and ocean may be relevant, a single weather record is not. It is not yet clear what is responsible for the island’s appearance.

"This article is exceptionally good in delivering accurate information in an engaging way. There are many useful statements made about the effects of climate change on extreme weather globally and in Australia and these have been backed up by links to relevant peer-reviewed literature." 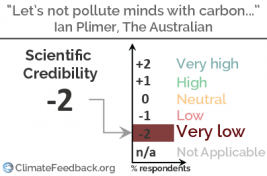 "This article is a mixture of misdirection, misleading claims, and outright falsehoods. The author attempts to paint a picture of current climate change as simply a continuation of natural changes that have occurred in the past. But this neglects the clear evidence that climate change over the last two centuries has been shown to be largely man-made, that it is much more rapid that anything we have seen in the last two thousand years if not longer, and that it is occurring in the context of a globe with more than 7 billion human inhabitants."

in The New York Times, by Eugene Linden

"Most of the specific facts and statistics in this op-ed are correct, but the overall effect is significantly misleading. The author’s central point is that scientists have been drastically underestimating the scope and the pace of climate change until just the past decade or so, and recent events such as permafrost melting, ice cap loss, and extreme weather events have caught them by surprise. This is simply not true."