Seven scientists analyzed the article and estimated its overall scientific credibility to be ‘high’ to ‘very high’. more about the credibility rating
A majority of reviewers tagged the article as: Accurate, Insightful, Sound reasoning. 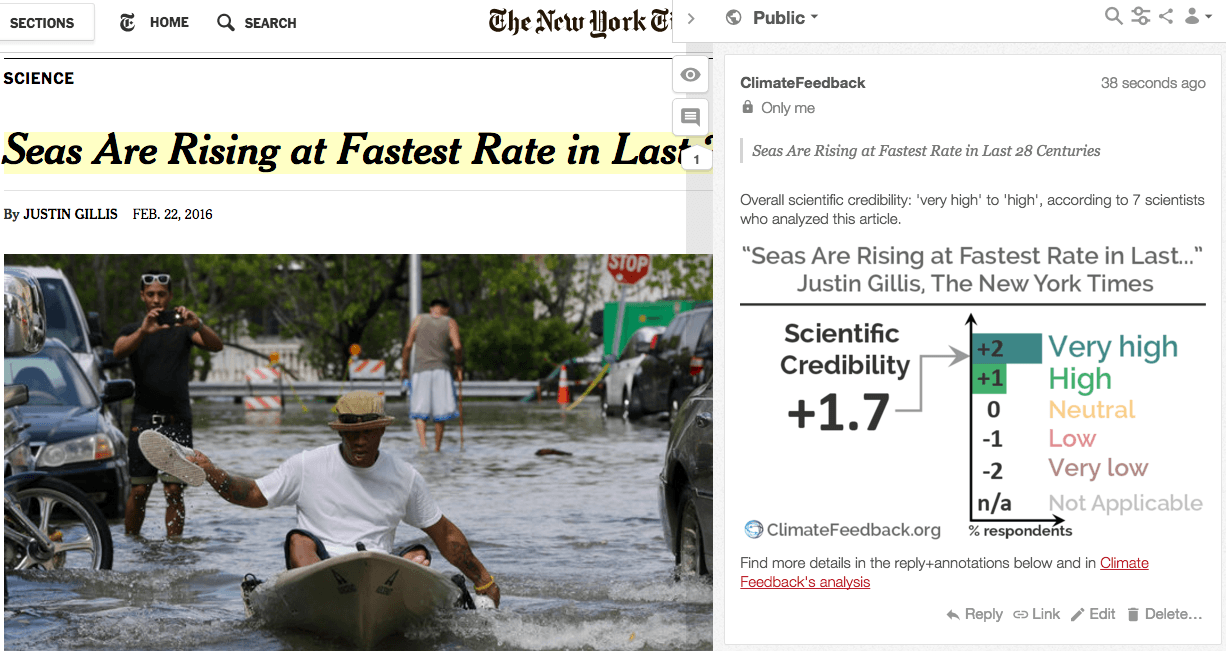 Justin Gillis reports on new results showing that the current rate of sea level rise is unprecedented in a record dating back 2,000 years. The article explains that this rise is attributable to human-induced climate change, and that higher sea levels are already impacting coastal communities. The seven scientists who reviewed the article confirmed that it is accurate and insightful.

Note that results about the increased frequency of coastal flooding in the US discussed in this article are from a Climate Central’s analysis that has not undergone formal peer-review. We wish to stress this point as peer-review is a mechanism that allows to increase the trust one can have in a result and ensures the work meets higher standards of scientific quality.

Robert Nicholls, Professor of Coastal Engineering, University of Southampton:
The article by Kopp et al (on which The New York Times is reporting) provides a quite convincing attribution of much of 20th century and early 21st century sea-level rise to human-induced warming. It shows that the recent rate of rise in sea level is unprecedented in more than 2000 years of record and that these changes are almost certain to accelerate substantially into the future. Interestingly this new analysis also appears to reinforce the conclusions of the IPCC Fifth Assessment Report about sea-level rise expectations through the 21st century. While human activity has been linked to sea level rise forecasts before, here human activity is linked to observed changes, which is an important improvement.

Andrea Dutton, Visiting Associate Professor, University of Wisconsin:
This article is an accurate and insightful summary of the recently published research on this topic. Justin Gillis has a strong background in this topic which comes across through his careful language and nuanced understanding of the issues.

Note however that the Climate Central report is not peer-reviewed literature. This was not clear in much of the press coverage and was not clear at the beginning of this article where these two “studies” are presented as equals. Even if the report by Climate Central is correct, it should not be elevated to the status of peer-reviewed literature by the media.

James E Neumann, Principal, Industrial Economics:
The article is highly accurate and cites relevant new work, but omits other recent relevant work (Andrea Dutton has provided in annotations) and what might be helpful discussions of the key mechanisms of sea level rise. These are relatively minor points.

Aimée Slangen, Researcher, Royal Netherlands Institute for Sea Research (NIOZ):
The article gives a good overview and insight into the main conclusions of both the Climate Central report (by Dr. Strauss) and the research paper (by Dr. Kopp), and links the two well.

Rasmus Benestad, Senior scientist, The Norwegian Meteorological institute:
The article gives a good account of some new papers that recently have been published about the global sea level.

Stephan Lewandowsky, Professor, University of Bristol:
The article does a very good job reporting the papers and is entirely accurate. I did not spot any errors or even minor glitches–well done. Mr Gillis does an exemplary job in reporting science factually and accurately.

The quotes below are from Justin Gillis’ article.

1. Current pace of sea level rise is unprecedented in history of human civilization and this rate of sea level increase cannot be explained without human influence.

“in the absence of human emissions, the ocean surface would be rising less rapidly and might even be falling.”

Aimée Slangen, Researcher, Royal Netherlands Institute for Sea Research (NIOZ):
To clarify: the study by Kopp et al uses hypothetical temperature scenarios to show that if temperatures in the 20th century had been similar to the average temperature of the years 500-1800, sea-level rise would have been less rapid or even falling.

Long-term global mean sea-level change for the past 20,000 years (black line) based on palaeo sea level records and projections for the next 10,000 years for four emission scenarios. From Fig. 2 in Past and future changes in global mean sea level

2. Sea level rise has and will have very significant economic impacts, for instance by flooding coastal cities.

“The worsening of tidal flooding in American coastal communities is largely a consequence of greenhouse gases from human activity, and the problem will grow far worse in coming decades, scientists reported Monday.”

Andrea Dutton, Visiting Associate Professor, University of Wisconsin:
An accurate summary of the research that was published by Kopp et al. in PNAS. In fact, if anything, it is somewhat of an understatement given that the worsening of tidal flooding may be ENTIRELY due to the influence of greenhouse gases from human activity. This is based on the statement in the published research by Kopp et al (PNAS) that sea level in the 20th century may have “very likely risen by between -3 cm and +7 cm “, which is a way of saying that it may have fallen by 3 cm or risen by up to 7 cm over that time frame in the absence of [human-induced] global warming.

Robert Nicholls, Professor of Coastal Engineering, University of Southampton:
While the rises in sea levels to date are small, they have had impacts and greatly increased nuisance flooding along the US East Coast as Strauss et al demonstrate.

As sea levels continue to rise this will be extremely challenging to residents of the US East Coast and globally around the world’s coasts. This shows the benefits of sustained reductions in greenhouse emissions. Further these coastal communities will need to adapt in a systematic way to the sea-level rise that has occurred which is also challenging.

“roughly three-quarters of the tidal flood days now occurring in towns along the East Coast would not be happening in the absence of the rise in the sea level caused by human emissions.”

Emmanuel M Vincent, Research Scientist, University of California, Merced:
The trend in the number of “coastal flood days” in the US is convincing supporting evidence of this conclusion.

“Experts say the situation would then grow far worse in the 22nd century and beyond, likely requiring the abandonment of many coastal cities.”

3. Sea levels are expected to rise 0.5 to 1 meter on average by 2100, and the rise should impact mean sea levels for millenias.

“One of the authors of the new paper, Dr. Rahmstorf, had previously published estimates suggesting the sea could rise as much as five or six feet by 2100.”

Andrea Dutton, Visiting Associate Professor, University of Wisconsin:
This is an accurate representation of the previous and current research. It might have been nice to also note here that because the models he used probably don’t fully account for the rate of mass loss of ice from the polar ice sheets that the 3-4 feet estimate in the current research and in the IPCC may well underestimate the eventual magnitude of global mean sea-level rise by 2100.

“In an interview, Dr. Rahmstorf said the rise would eventually reach five feet and far more — the only question was how long it would take. Scientists say the recent climate agreement negotiated in Paris is not remotely ambitious enough to forestall a significant melting of Greenland and Antarctica, though if fully implemented, it may slow the pace somewhat.”